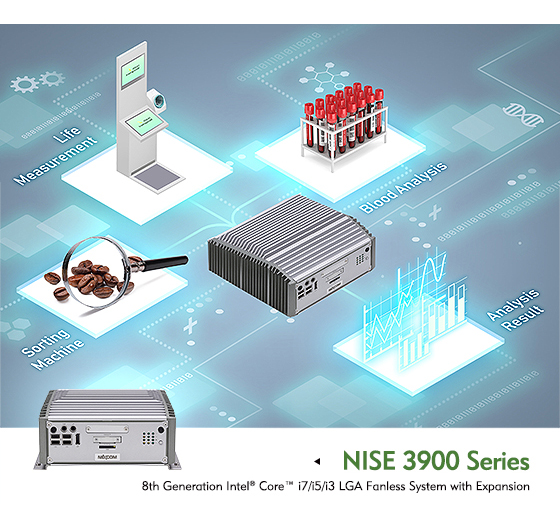 Wide Range of High Performance CPU Options
With its unique heat dissipation design, the NISE 3900 series is a high-performance fanless computer, powered by an Intel®8th Generation Core™ Coffee Lake series i7/i5/i3 LGA socket CPU. Easy replacement from a wide range of Intel® 8th Generation i7/i5/i3 CPUs allows customers to manage and determine desired levels of CPU performance based on individual business requirements and budgets. In the last 11 years Intel® Core i5 and i7 CPUs have only featured four cores. Coffee Lake, however, has changed this, in that only Core i3 CPUs have four cores while i5 and i7 CPUs now support six cores. Intel® also guarantees availability of the NISE 3900’s embedded desktop CPU for 15 years, vital for industrial applications. Achieving CPU benchmarks of >45% over the NISE 3800 series, the NISE 3900 series is best used for big data analytics and edge server applications.

High Scalability Satisfies Diverse Demands
The NISE 3900 also satisfies the needs of rapidly growing IoT applications with its great flexibility in card selection. Not only equipped with PCI slots, it’s also configured with the latest PCIe cards, offering versatile connectivity with different cards, such as capture, video, USB, and LAN cards. Depending on expansion requirements, customers can easily choose between one PCIe and two PCI/PCIe cards. For big data collection and analysis, which requires mammoth storage, the NISE 3900R, which supports two hard drive spaces, is definitely the right fit. For the customer looking for a competitively priced model, the NISE 3900E-H310 is a good choice. With such versatility, the NISE 3900 series can also be used for numerous applications, such as factory automation, the logistics industry, e-charging stations, and so on.

Rich Connectivity
Customers not only benefit from the adaptability of the NISE 3900 series but also its rich I/O interface. It has three independent displays via DVI-D, DP, and HDMI connections, the latter two able to display 4K/2K resolutions simultaneously. There are also a number of choices for storage, with one front-accessible M.2 slot and up to two 2.5" SATA hard drives. Two COM and 10 USB ports are also equipped for the greatest utility in packing and dispatching services. Even more, the NISE 3900 series supports TPM2.0 onboard and contains three LAN ports, one of which supports iAMT for remote network management, whose efficiency lowers maintenance costs.

The NISE 3900 series is the best solution for IoT gateway and and edge server applications with its traditional connectivity via RS232/RS422/RS485, for legacy data communication, and wireless transmission by mini-PCIe and M.2 devices, for optional Wi-Fi and LTE modules. An optional interface for four GPI channels, four GPO channels, and two internal COM ports is also available for additional needs.